In my real life I have a lot of exposure to large aircraft and their required maintenance. The FAA has four levels of periodic inspections to keep the general public and military aircraft users as safe as possible; A, B, C, and D checks. A-checks are the least comprehensive and occur frequently. D-checks, on the other hand, are extremely comprehensive, involving major disassembly, removal, overhaul, and inspection of systems and components. D-checks may only be done a handful of times in the life of an aircraft because the expense may not be worth the value of continued use. During a D-check the aircraft needs to have every fastener, nut, wire, hinge, and component inspected, repaired, maintained, or replaced. Because of the high cost and length of time, maybe 50,000 labor hours, required, older planes may not be worth going through this process, and will be scrapped for parts.

It’s almost sad to think of all the great cars that have been parted out throughout history like Ferrari Dino’s that were not even considered Ferraris at one time or the Austin Healey 100s’ that have seen prices skyrocket over the last decades. I pulled over to look at a Triumph GT6+ parked along the road for sale not long ago and had to really control myself not to buy it. I mean, it was only $500, how bad can it be? I came to the conclusion that it was probably pretty bad once you get into it and it was probably time to part it out.

Well, while I continue to prepare my garage for my new MG Midget “D-Check”, I’m going to start with the simple visual inspection. I then plan on tearing the car down and doing an amateur restoration but, there are the obvious things I know I’ll need to do…. New paint, new interior, new brakes (I had to drive it off the truck and into my property in reverse because the brakes were frozen and the car wouldn’t drive forward), it will need new side curtains and rubber, all the bright work will be refinished, but there will be many things I discover as I tear it down that will make me regret my decision more than once I’m sure.

Since I haven’t got the garage ready for the work yet, I’m going to start my documentation of my amateur restoration with my visual inspection.

The MG Midget was produced by the MG Car Company in 1961 with a price tag of £669. The last car rolled off the production line in 1979 after British Leyland had taken ownership of the company.

Midget model was originally used in the 1920’s to describe the C Type Midget followed by the D Type, J Type, the TD Midget, and others until the TF Midget in the 1950’s. Today the first Midgets are almost never referred to as Midgets and the MG model of Midget usually refers to the cars made between 1961 and 1979. It was the Midget series that established MG as a manufacturer of sports cars in motor sport in the 1920’s.

The Midget MK1 was really a re-badged Austin Healey Sprite MK2 that originated from the Frogeye or Bugeye Sprite (MK1).

Sprites and Midgets are often considered one and the same car and are called Spridgets by many. The MG Midget Mk1 and Austin-Healey Sprite MK2 were introduced in 1961 with a 52 bhp 948cc A Series engine, sliding plexiglas sidescreens in the place of roll up windows, and a convertible top that needed to be completely removed with its frame and stored in the trunk. There are no external door handles requiring the driver and the passenger have to slide the side window open to reach inside to open the door.  The Midgets MK1  and Sprites MK2 had the square rear wheel arches with quarter elliptic rear springs and a front slatted aluminum radiator grill, almost all parts are interchangeable between the two marques except the badging.

Current Values and condition definitions according to Hagerty:

Condition #1 vehicles are the best in the world. The visual image is of the best vehicle, in the right colors, driving onto the lawn at the finest concours. Perfectly clean, the vehicle has been groomed down to the tire treads. Painted and chromed surfaces are mirror-like. Dust and dirt are banned, and materials used are correct and superbly fitted. The one word description for #1 vehicle is “concours.”

#2 vehicles could win a local or regional show. They can be former #1 vehicles that have been driven or have aged. Seasoned observers will have to look closely for flaws, but will be able to find some not seen by the general public. The paint, chrome, glass and finishes will all appear as excellent. No excessive smoke will be seen on startup, no unusual noises will emanate from the engine. The vehicle will drive as a new vehicle of its era would. The one word description for #2 vehicles is “excellent.”

#3 vehicles could possess some, but not all of the issues of a #4 vehicle, but they will be balanced by other factors such as a fresh paint job or a new, correct interior where applicable. #3 vehicles drive and run well, but might have some incorrect parts. These vehicles are not used for daily transportation but are ready for a long tour without excuses, and the casual passerby will not find any visual flaws. “Good” is the one word description of a #3 vehicle.

#4 vehicles are daily drivers, with flaws visible to the naked eye. The chrome might have pitting or scratches, the windshield might be chipped. Paintwork is imperfect, and perhaps the body has a minor dent. Split seams or a cracked dash, where applicable, might be present. No major parts are missing, but the wheels could differ from the originals, or other non- stock additions might be present. A #4 vehicle can also be a deteriorated restoration. “Fair” is the one word that describes a #4 vehicle.

Good links from around the web:

A very nice blog on an MK1 restoration

Parts for you MK1 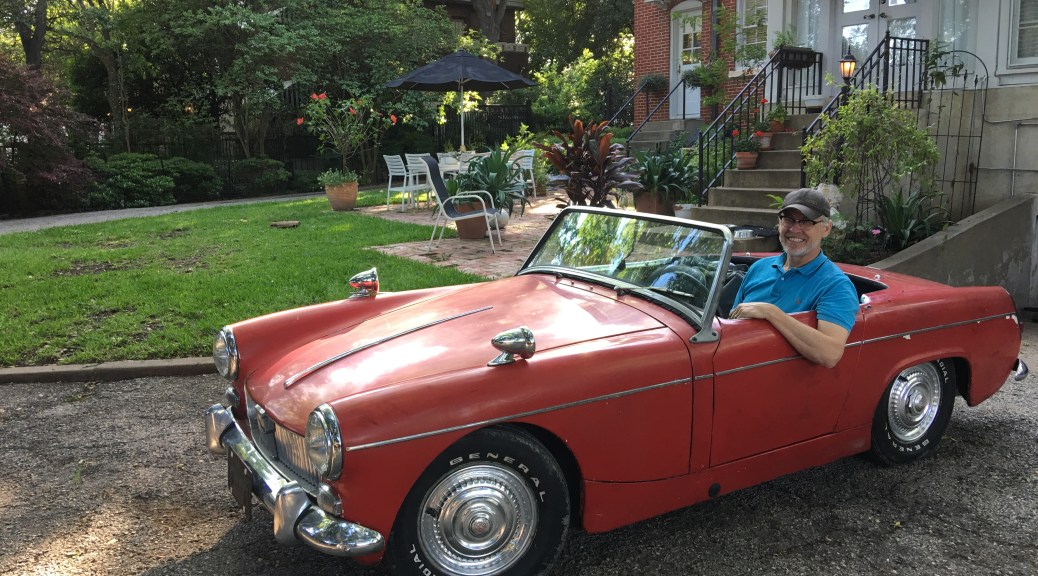